Improve Your Cash Flow - Get Your Invoices Paid More Quickly

Small businesses rely on timely payments to keep cash flow manageable, and late payments can lead to setbacks that create giant ripples within the business.

A study by Associated Press shows that on average, U.S. small businesses see invoices paid in 23 days. Still, more than a quarter of U.S. small and medium businesses (SMBs) surveyed said they wait longer than 30 days to have their invoices paid, and more than 40 percent said collecting business invoice payments presents the largest problem to their cash flow.

Financial software firm Wave cites multiple studies of problems when doing business abroad, finding that 60 percent of invoices are paid late and that the smallest businesses wait an average of 72 days before their invoices are paid.

According to freelancing solution provider Bonsai, freelancers (who tend to operate as independent small businesses themselves) frequently face late payments, as well. The firm analyzed three years' worth of freelance invoicing data to determine that 29 percent of freelance invoices are paid late. 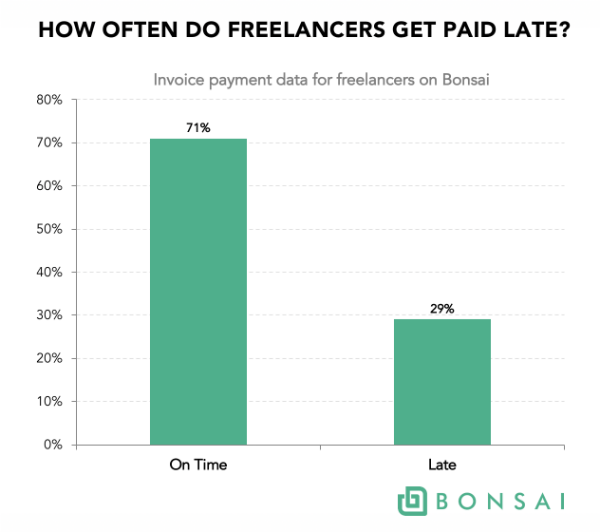 Whether you're running a freelance operation or a more traditional small business, the late payment of a large sum can put a major damper on your cash flow, which can create big problems. If your cash flow is negative, you'll need to come up with alternate sources of income to pay off any debts.

Needless to say, getting your invoices paid more quickly could be the difference between major cash flow problems and running a successful operation.

To get your invoices paid more quickly and improve cash flow, you must be vigilant in keeping up with accounts receivable. Don't simply wait around to be paid. Follow up. Use accounting software to help you keep track and stay organized. Running a business means your mind will be focused on many different areas, so use tools that will help you.

If it makes sense for your business model, consider requiring payment up front, even if it's just a minimum deposit. Either way, be sure to get your invoices out as quickly as possible. This not only gets it in the customer's hand more quickly, it demonstrates that you mean business. If you take a long time to send the invoice, you might as well be sending an invitation for the customer to pay at their leisure. It's also a good idea to charge a late fee. You might even consider offering a discount for early payment.

No matter what precautions you take, you're likely to run into some amount of late payments if you don't require payment up front. The more you can do to discourage them before they happen, the better your cash flow situation is likely to be.